On Sunday, I helped my friend Emily move out to her new digs in Kananaskis Country. We got up and loaded up our cars early in the morning, then headed down the Trans-Canada Highway to Nakiska Ski Resort. I always forget how lucky we are to, quite literally, have the mountains right in our backyard. It’s also been awhile since I’ve hit the highway, which was something I used to do at least every two months, so it was a welcome respite from the concrete jungle. After we finished unloading, we even had a little time to unpack everything and get her settled in. We’d booked a 3:30pm tour at Park Distillery, so we headed out around 2:30pm to make the 45-minute drive to Banff.

We arrived at Park a little early, so we sat ourselves down at the bar and ordered a “Cougar Milk” while we waited for our tour to begin. A seasonal drink feature, it’s made with Park’s own vanilla vodka and espresso vodka, in addition to condensed milk, honey, butter, and hot water. It’s also topped with a creamy cinnamon foam. 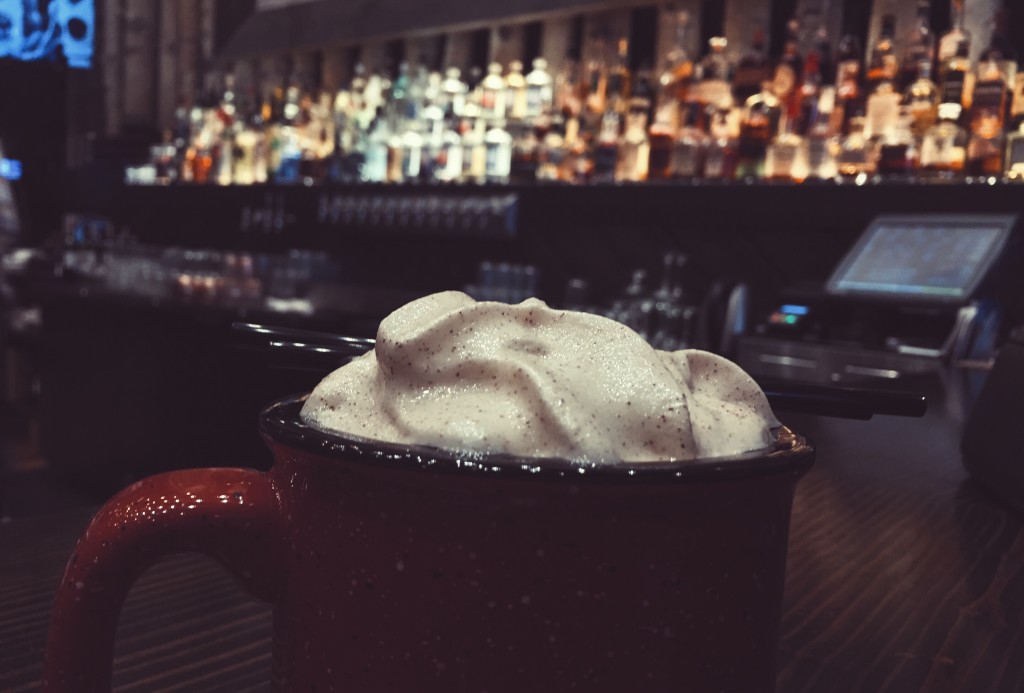 The decor at Park is “cozy après ski meets upscale craft brewery” (think National on 10th meshed with a cabin in the backcountry). Picnic tables on the sidewalk outside are lined with ivory sheepskin throws. Inside, bright red vintage camping lamps hang from large wooden beams. There are also framed displays of local postcards and photographs, a collection of vintage Banff pennants, and other knick-knacks you might find in an old ski lodge. The bar at Park is equally as cozy and beautifully decorated, with a back wall lined with bar-to-ceiling birch trees and an endearing painting of a man tipping his hat to a grizzly bear (not to mention the well-stocked bar).

Soon, we were ushered into a glass chamber adjacent to the bar, which housed shiny, towering, German-made copper distillery equipment. Nicole, our tour guide, introduced us to the second step of making spirits: where the liquid that would eventually become craft spirits were essentially purified. This was done by heating up the liquid from the first step (called “wash,” which will be explained below) until it vaporized, then cooling it until it became a liquid again. The vaporized alcohol would travel upwards (and you could sometimes even see it as it was happening through the little windows in the tower), while the remaining water would be filtered away from the wash. During this step, depending on the spirit, they might also add certain ingredients in a mesh bag and allow them to steep. This flavours the spirits with a unique recipe. Included in the mix for their upcoming gin is local juniper berries picked from just outside of Banff!

(Interesting tidbit: Nicole also explained how distilling multiple times is simply a myth of the liquor industry, and that it often has little or no effect at all on the taste of the finished product.)

Next, she led us through a narrow hallway heralded by a mounted deer head, into a back room with two large Kothe fermentation towers—the same brand as the copper distilling towers we’d seen out front. Here, she explained the first step of the entire spirit-making process: mash. Mash is is the process of combining a ground-up grain (or grain mixture) with water, and heating it up. This turns the starches in the mixture into sugar, which is then left to ferment in the tanks to turn the sugar into alcohol (with the help of yeast). After a certain amount of time, the liquid becomes “wash,” which is a lower-proof mixture that will then need to be distilled (as explained above).

(By the way, Kothe is their distillery equipment of choice because Park’s Master Distiller—Matt Hendriks—once worked in their Eislingen headquarters!)

The grain that Park Distillery uses, triticale, has never been used alone to make a spirit—until now. Nicole passed around a small mason jar, and we all tried a few of the small, indented grains, which had a nice nutty and sweet taste. She also explained how while most vodka distilleries aim to produce an end result that is flavourless, theirs does have a slight taste and aroma to it (in other words, it has character). These grains are driven to Park and unloaded weekly, from a local Albertan farm. The water they use in the mash is also Glacier-fed from six local glaciers in the area. Park, if you couldn’t tell already, clearly has a great mentality of supporting “local.”

Next, we made our way to the aging room. Here, oak barrels are filled with the distilled liquid and set aside to mature. For each of Park’s flavoured vodkas, hand-picked ingredients are infused into the spirit. Half of a real Madagascar vanilla bean is left to soak in their Vanilla Vodka, three African bird’s eye chili (as known as piri piri) from Thailand is used in a bottle of their Chili Vodka, and two ounces of local Banff Roasting Co.’s espresso blend steeps in their Espresso Vodka. Once they have steeped for the perfect amount of time, they are bottled into Park’s branded glass bottles—ready for sipping and savouring! We had a small taste of Park’s Vanilla Vodka, which was a far cry from the typical chemically-flavoured vanilla vodkas on store shelves. The result of using completely natural ingredients imparts a wonderful sweet-but-not-too-sweet taste that lingers on the palate, unlike the cloying sweetness of usual factory-distilled brands that leave only the taste of the alcohol almost immediately after drinking it. Highly recommended.

We finished off the tour by checking out their liquor and merch store, which was filled with souvenirs you actually want to buy (no generic Canadian flag-bearing stuffed beavers here). My personal picks were: an embroidered plaid blanket with a leather carrying strap, camping matches in a compact roll, their enamel mugs, and copper steins. Sadly, the copper steins I wanted were all sold out, but a new shipment will be in later this week—and they ship across Canada! Nicole also tipped us off that their online store will be up shortly…but, of course, it’s always more fun to get the souvenir right from the source. We finished off our day at the distillery with dinner at their in-house restaurant. Since we ate fairly early, they were still only offering lunch service. No matter, as they still had lots of delicious-sounding options to select from. As a cheese gourmand, I went straight for the “Cheese & Whisky Fondue” with cured meats, served with pretzel bread, pickles, and “fixin’s.” We decided to share the fondue as an appetizer, and ordered the “Chicken & Ribs” as a shared entrée.

The Gruyère, whisky and confit garlic fondue arrived with a platter of seasoned baby potatoes, pickled cauliflower and carrots, tangy mustard, grapes, and Granny Smith apple slices. We completely devoured it, and even scraped the edges of the pot for every last delectable bite of ooey, gooey cheese. Next came the chicken and ribs, and our server—Derek—had been kind enough to fulfill our optional request for dark meat. (I also have to mention that Derek was doing double-duty—serving us, along with a few other tables, and doubling back behind the bar to also pour drinks. Props.) The dish was served with a rustic coleslaw, mashed potatoes and a gravy made from delicious drippings, as well as “mop sauce.” This sauce was served in an on-brand enamel cup and mini basting brush for us sauce our ribs, DIY-style. Overall, the food was delicious, and the only fault I had was with my mediocre stomach capacity. By the end of the meal, we were both sitting in that awkward, reclined, this-is-a-public-restaurant-so-we-can’t-lay-down position every foodie is familiar with.

Park is located along Banff’s main street, at 219 Banff Ave (403-762-5114, parkdistillery.com). In Calgary, their spirits are available at Vine Arts and Riverfront Wine & Spirits. Another insider tip: they’re on their last batch of their Vanilla Vodka (to make room for their upcoming gin), so be sure to get it now—it won’t be back until next fall!

Be sure to follow them on social media for photos, announcements, and other exciting news: